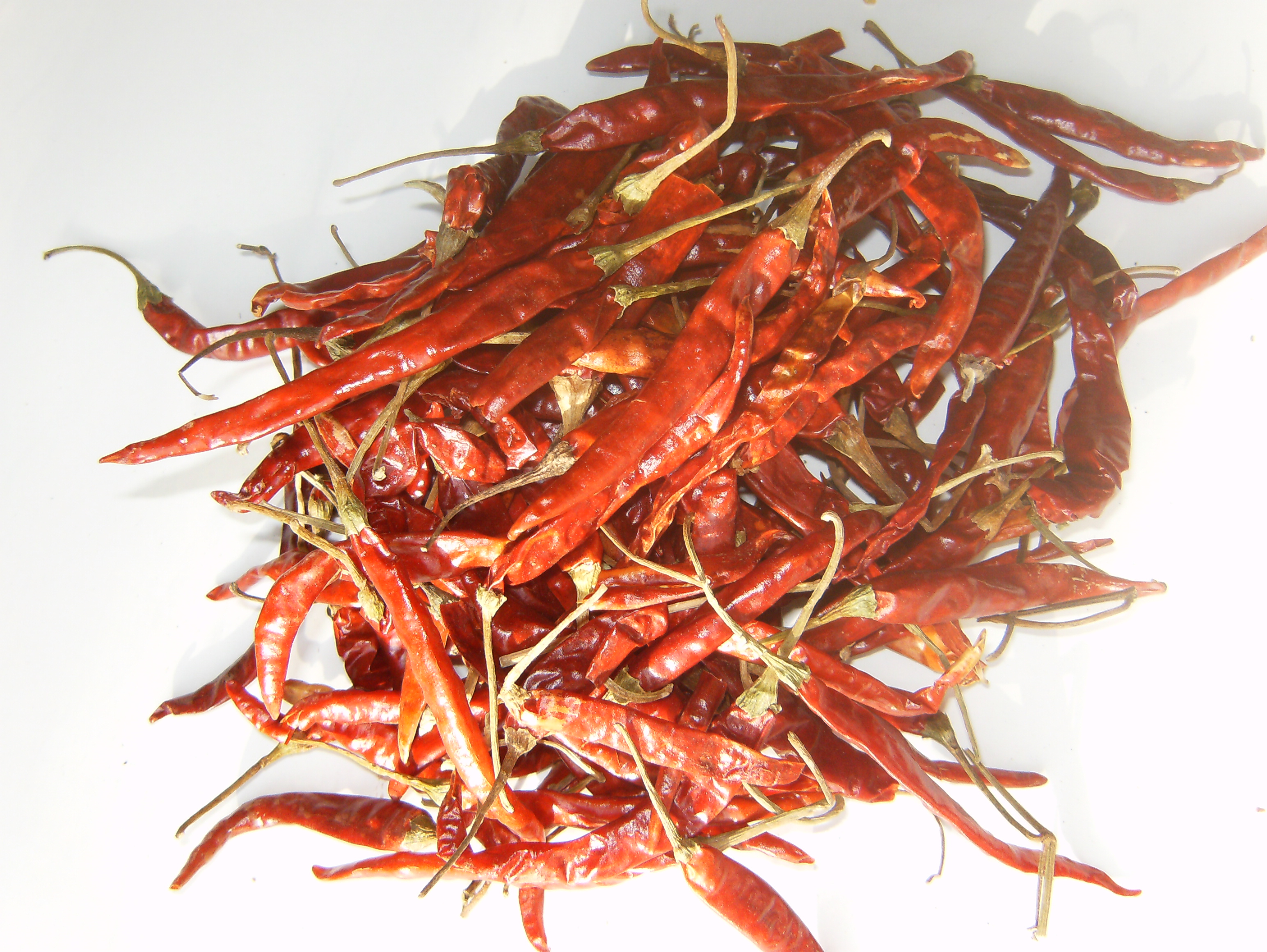 The word 'cayenne' is thought to be a corruption of the word quiínia (also sometimes spelled kyynha or kynnha) of the Old Tupi language once spoken in Brazil, which means pepper (thus 'cayenne pepper' means 'pepper pepper'). It is probable that the place Cayenne in French Guiana was named after the peppers, not vice versa, although it is commonly claimed that the pepper was named after the city. Nicholas Culpeper, for example, uses the word 'cayenne pepper' in 1652, and the city was only renamed as such in 1777 It also is possibly named for the Cayenne River. Regardless of the naming, the word cayenne pepper is now used to describe many varieties around the world where all have similar characteristics such as being a long thin, very hot, and very prolific. The cayenne pepper is one of the most known and widely used varieties around the world. 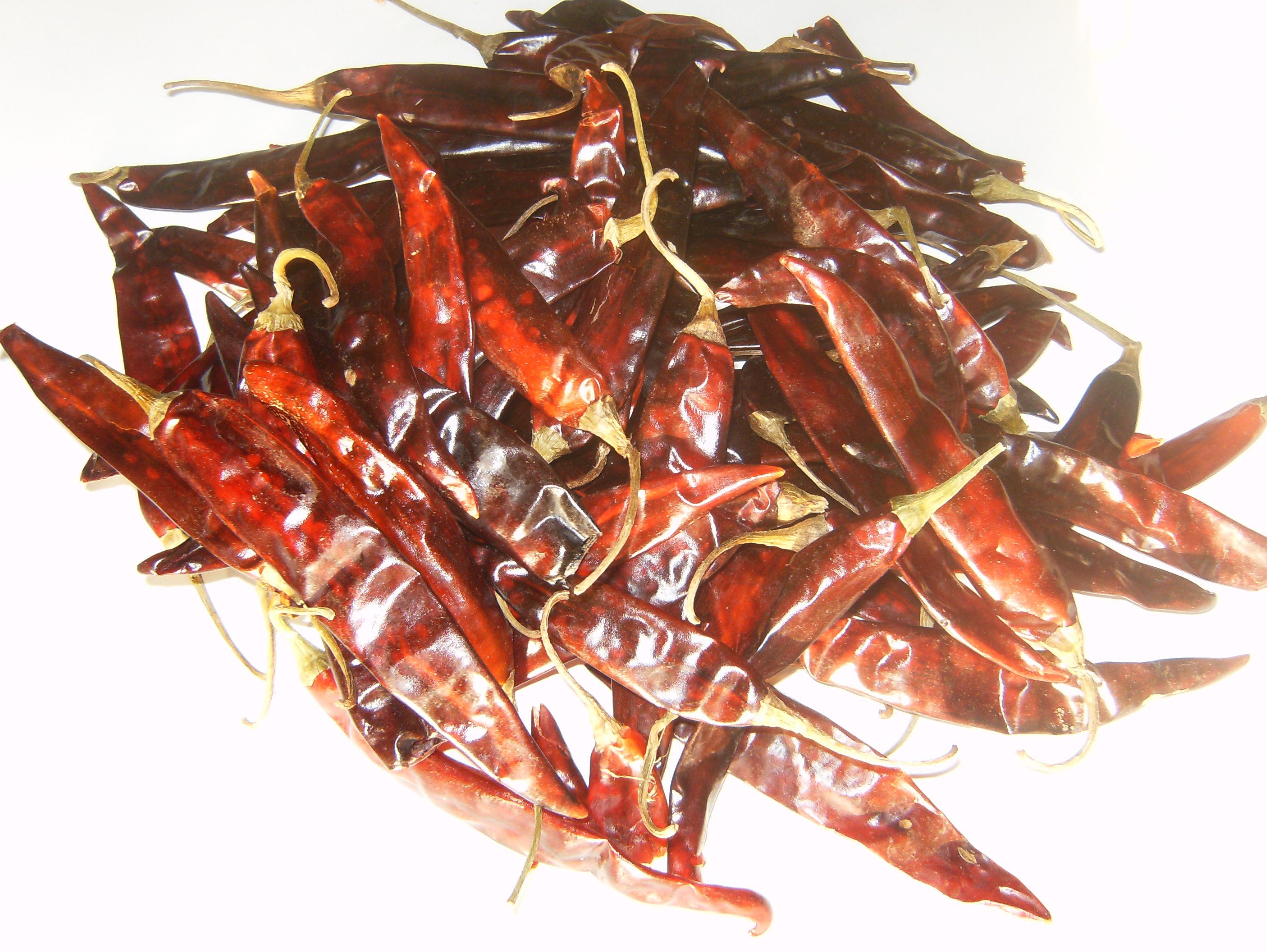 The first recorded use of the word paprika in English is from 1896, although an earlier reference to Turkish paprika was published in 1831.  The word derives from the Hungarian word paprika, a diminutive of the Croatian word papar meaning "pepper", which in turn came from the Latin piper or modern Greek piperi, ultimately from Sanskrit pippalī.  Paprika and similar words, peperke, piperke, and paparka, are used in various Slavic languages for bell peppers.

Paprika is used as an ingredient in numerous dishes throughout the world. It is principally used to season and color rices, stews, and soups, such as goulash, and in the preparation of sausages, mixed with meats and other spices. In the United States, paprika is frequently sprinkled raw on foods as a garnish, but the flavor is more effectively brought out by heating it in oil.

Hungarian national dishes incorporating paprika include gulyas (goulash), a meat stew, and paprikash (paprika gravy: a Hungarian recipe combining meat or chicken, broth, paprika, and sour cream). In Moroccan cuisine, paprika (tahmira) is usually augmented by the addition of a small amount of olive oil blended into it. Many dishes call for a generous amount of paprika (colorau) in Portuguese cuisine for taste and color.

The name Aji Amarillo in Spanish means yellow chili/pepper. This is the most widely used pepper in Peru. It is an old ancient pepper locally called Aji Escabeche when fresh and Cusqueno when dry. The pepper tastes so good is has been dominating the Peruvian, Bolivian, and Colombian cuisine. In Peru, locals use this pepper as the main ingredient in their Aji de Gallina ("Hen Chili") and Huancaina sauce. In Bolivia, the Aji Amarillo is the main ingredient in Fricase Paceno. The pepper has a natural sweet mango like flavor, being medium to low hot, this pepper The powder from this variety is a great seasoning on everything, especially when you are looking for medium heat seasoning with a natural smell and taste of mango and pineapple combined in your cooking.

Another Peruvian famous pepper used in many Peruvian cuisines. This dry pepper has a very distinctive rich berry like flavor. The taste is not the only reason this pepper is highly wanted, the medium heat makes it perfect for those who like to an additional heat to their food. Many users try this pepper as the main ingredient when preparing sauce for fish and rice. Both the dry pods and the powders have a strong noticeable smoky like aroma. 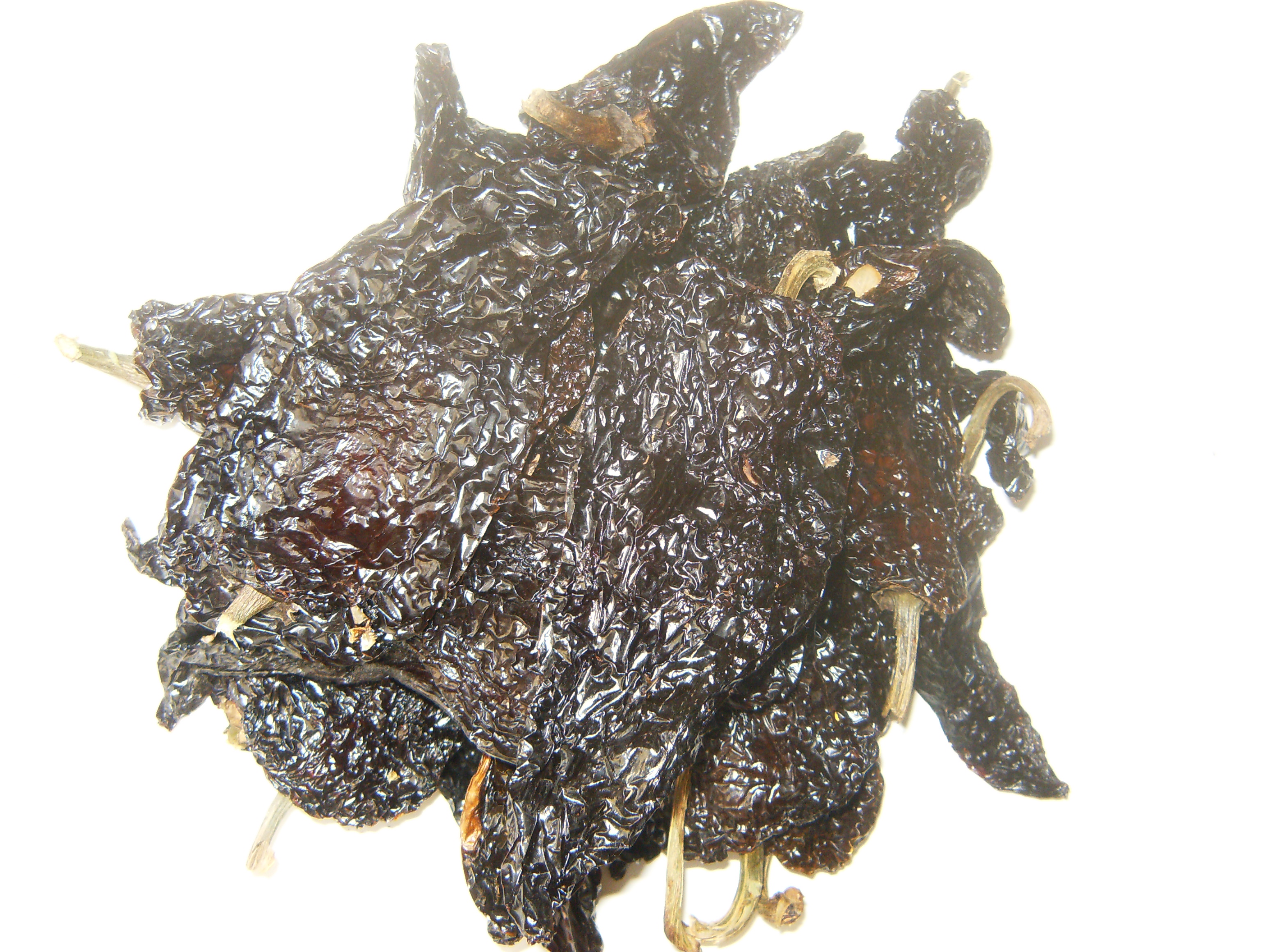 Ancho, also known as Poblanos are originally from Puebla, México. The name Ancho means wide chili, and it is used to describe the Poblano which is the fresh pepper. This is the most common used pepper in Mexico. The deep brown, almost black wide thick pepper has natural taste of raisin and smell of dry prunes. This medium heat pepper is the main ingredient in most authentic Mexican dishes such as Moles, enchiladas, salsa, tamales, soups, even rice dishes can be cooked with Ancho flakes giving the rice distinctive color, smell, and taste. The powder from this variety has an exceptionally sweet taste and aroma. 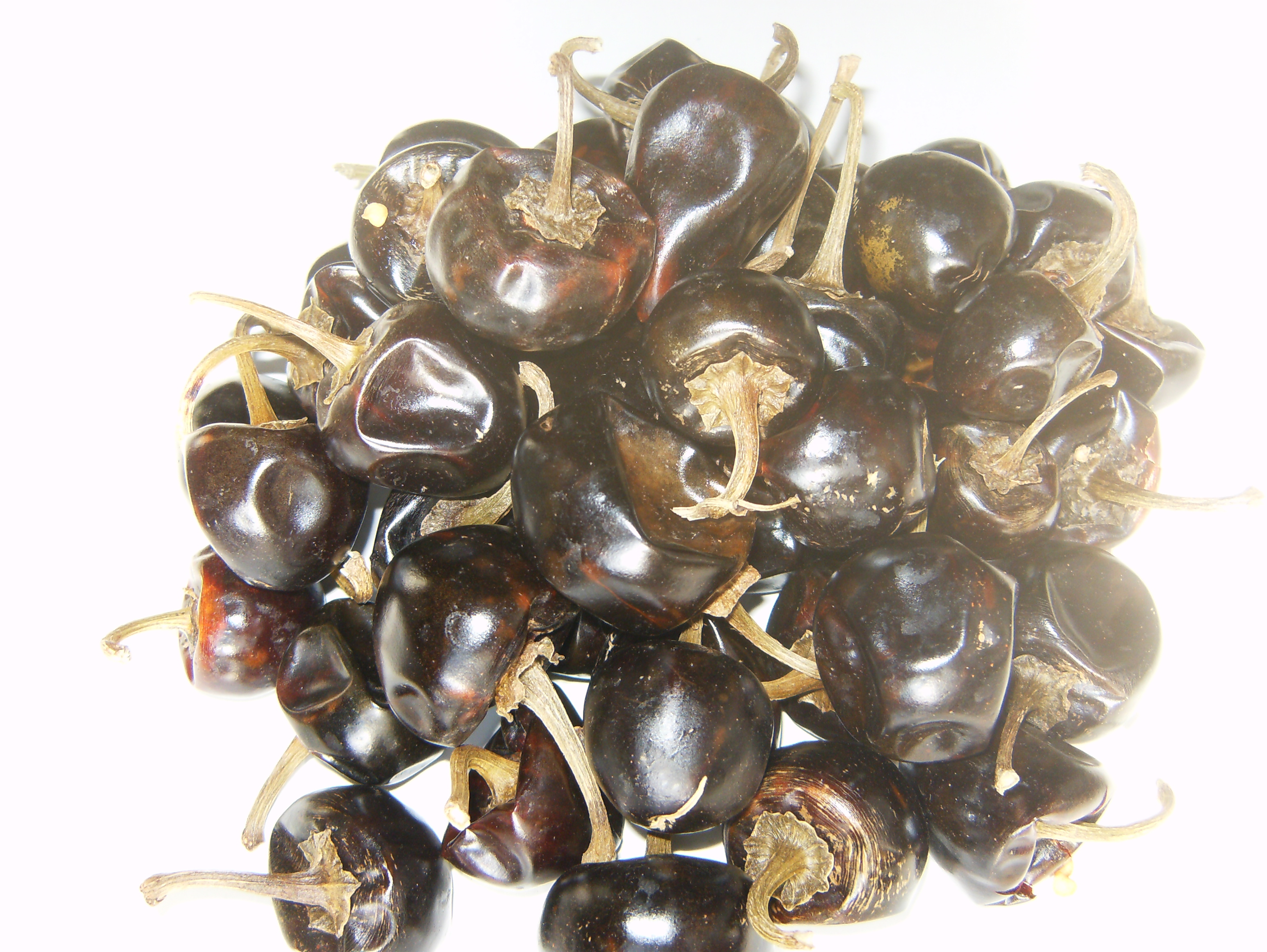 Also known as guajones, coras chili bola, and rattle pepper/chili because of the sound seeds make when the dry pods are shaken. This pepper is widely grown and used in several states throughout Mexico, mainly in Coahuila, Jalisco and San Luis Potosi, Durango and Guerrero. The pepper does not has strong smell as other Mexican peppers, however, it has its own pine nuts like rich sweet flavor which cannot be found in other chilis, widely used from marinades, stews and soups.

The red smoked famous jalapeno peppers are called chipotle. There are two types of chipotle, this one (Morita) and Chipotle Meco, two different seasoning made in two different ways using the same pepper, jalapeno. This version of chipotle sometimes called Chipotle Colorado, Chipotle Tipico, or Mora Chili. The Chipotle Morita or Blackberry chili is prepared by slowly smoking full ripen pods using a certain type wood for long period of times. This is an outstanding highly recommended spice when looking for adding natural smoky taste to your daily meals.

The second version of chipotle, this kind is made from red jalapenos that are larger in size and smoked for longer hours resulting in stronger, richer, more intense flavor than Chipotle Morita. Bothe kinds are made from the same pepper using different techniques. If you like your chipotle strong and rich, the Meco is your choice, but if you would rather have less smokey aroma and more of the chili’s taste, we recommend Morita. 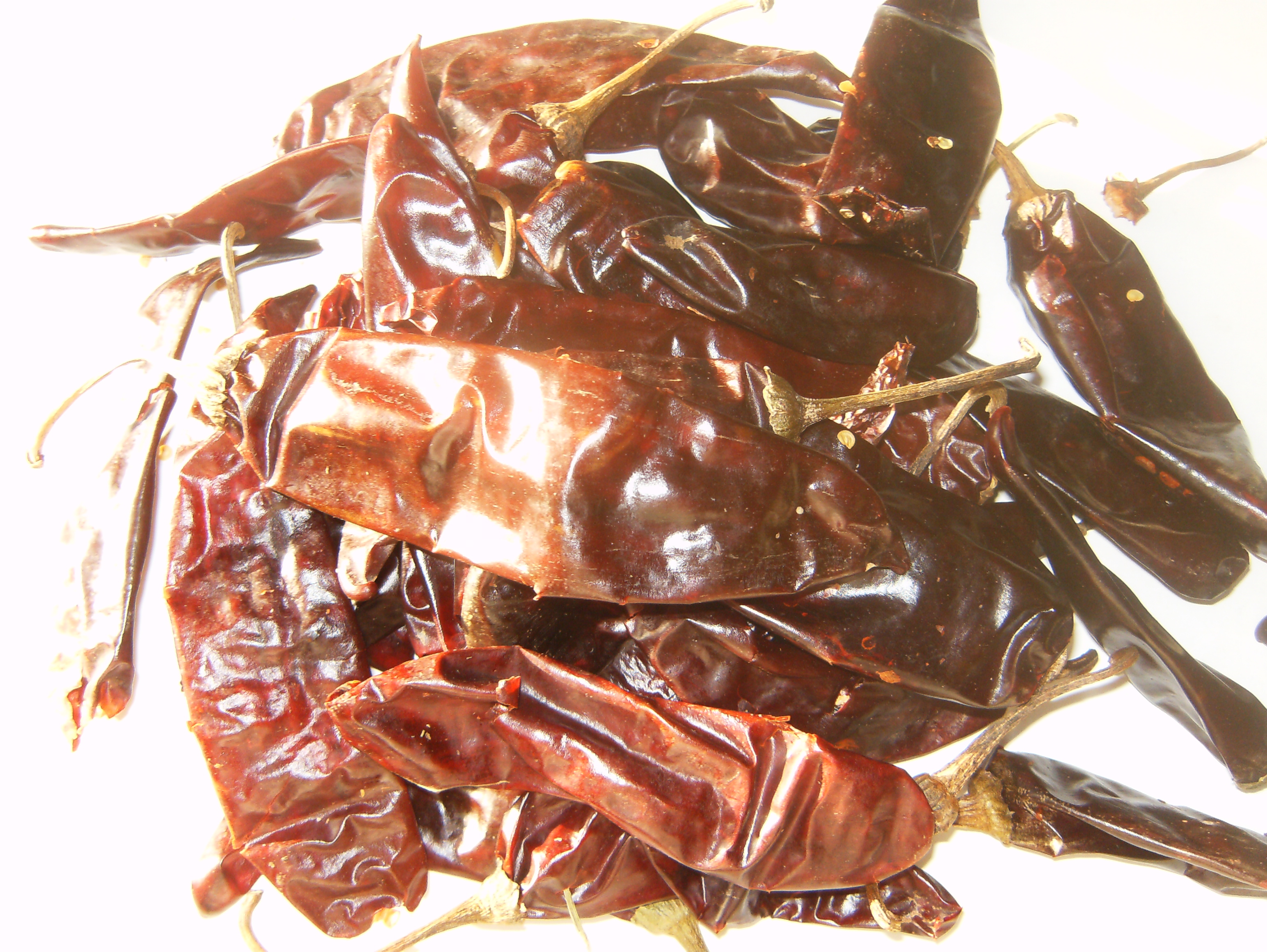 A widely used pepper in the local Mexican cuisine, large pods have thin walls can be used crushed whole for seasoning any kind of cooking. In Mexico, this pepper is used to make medium-hot sauce when cooking chicken. The flavor is not overwhelmingly hot, it just adds the right consistent amount of heat for the whole dish, also, the pepper has slight hint of sweetness followed by clean non bitter heat. The chili powder made from this variety is a moderate to low heat seasoning which can be used almost on anything when you need to add just the right amount of spiciness without being too sweet, hot, or acidic. The Guajillo taste does not stand out in your meal like other peppers do, therefore, the heat is barely noticeable and the taste is not too strong where you lose the flavor of other ingredients. 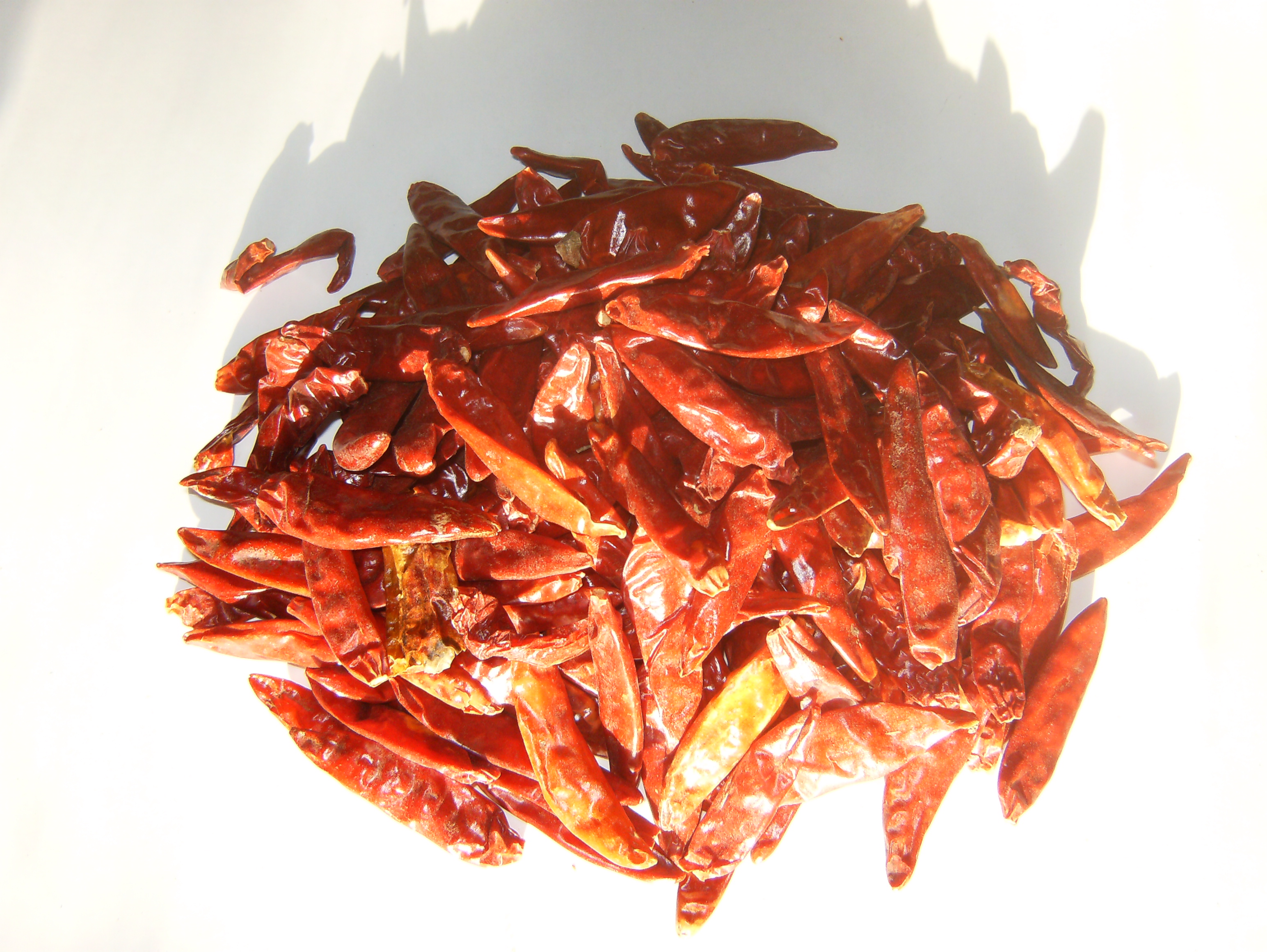 Another native Mexican pepper widely used all over the world especially in Southeast Asia. This pepper is favored over many other Mexican varieties due to its simplicity.  In Asian cuisine, the complexity of using other spices and cooking ingredients motivated chiefs to seek a chili which has a heat and low taste profile. This pepper became a favored Asian spice as it does not change the balanced taste of the final dish.  Instead, it just adds heat to the meal without flavor. As a result, Japones became a main ingredient in Szechuan cuisine, Sichuan cuisine, or Szechwan cuisine. 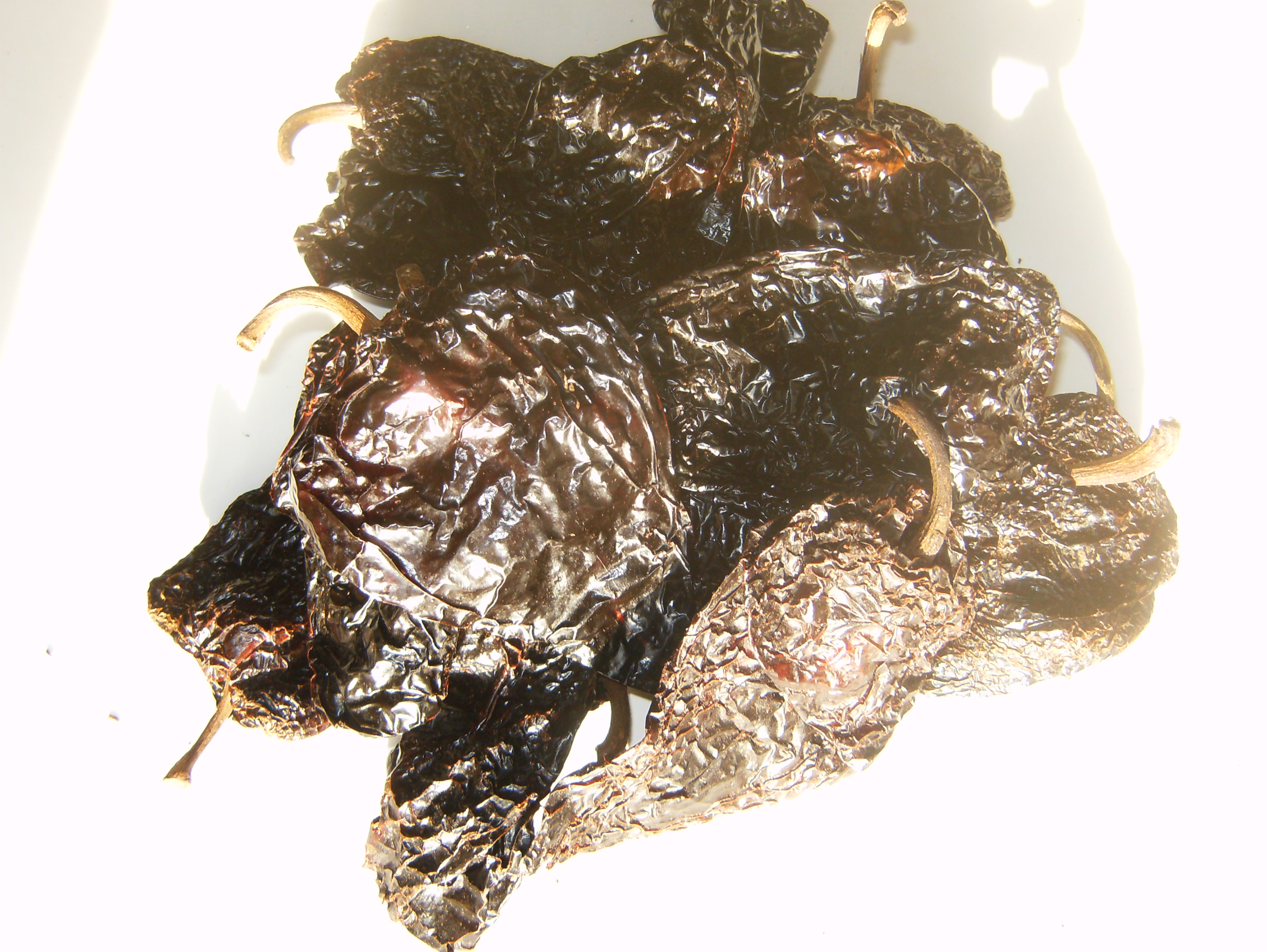 Closely related to Ancho, the difference is the stage of harvest. Mulato is left on the plants to ripen longer than Ancho, therefore, the dry Mulato has stronger, more intense and sweeter taste than Ancho. The Mulato are favored over Ancho when looking for a sweeter chili that has a complex flavor of licorice, cherries, and raisin over coffer, chocolate and smokey flavor, they smell and taste sweeter than Ancho. This pepper is a main ingredient in a true, authentic Mexican sauce served chicken or meat. If you found the Ancho to be less flavorful, too smoke, and not sweet enough for you, the Mulato should meet your expectations. 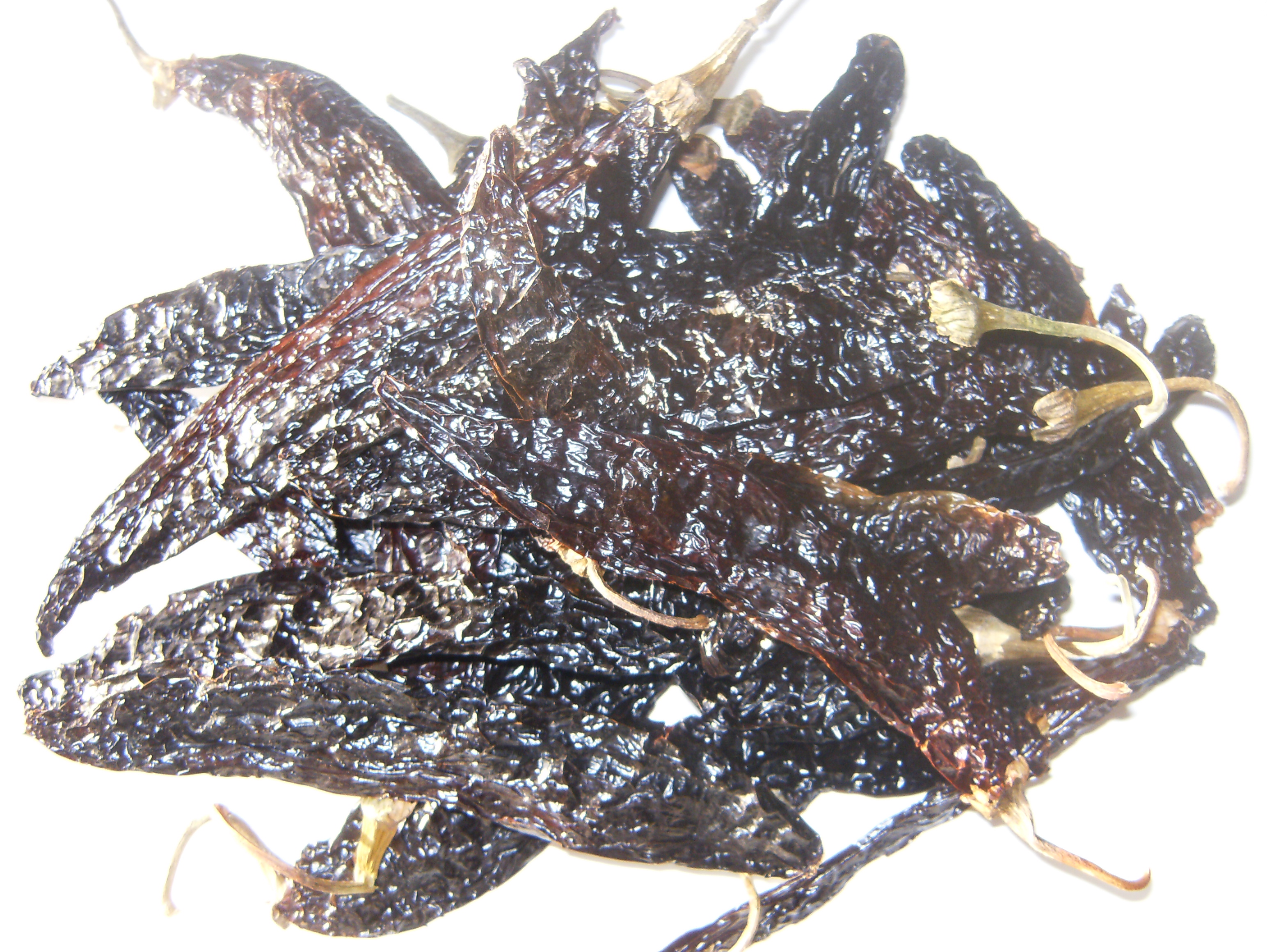 Very famous pepper in central Mexico, the name stands for little black raisin in a description of color, taste, and texture of this Mexican treasure. The dry pepper has very low amount of heat and highest levels of sweetness among all Mexican peppers. This profile has helped the chili gaining popularity among those who like to make chili puree where the heat is low and the licorice flavor/sweetenss is intense. In Mexico, this pepper is commonly used for adobo sauce and moles. Some users liked the taste so much, they actually mix some flakes with homemade chocolates and sweets.

This pepper is one of the six well-known New Mexico (aka Hatch chilies) grown in the city of Hatch in the New Mexico state. This variety, along with many other New Mexico (NuMex) is developed by the New Mexico State University in search for the best breeds to fit the Rio Grande agricultural area where Hatch city is located. In this city, each year on Labor Day weekend, more than 30,000 people gather there for the famous chili festival celebrating, eating, and sharing peppers, it is a cultural event. The complex flavor, of sweet, tangy, acidic, and hot flavor allowed this pepper to easily compete with other famous varieties like Ancho. The New Mexico dry pods are among the most demanded varieties in the international market. The pepper is used in an endless ways and recipes. The most recommended way is making your own seasoning mix where this pepper is the main ingredient. Many people enjoy this chili while cooking chicken as it dyes the white bland chicken with an appetizing red-orange color and more acidic tangy flavor with medium meat.

A milder version of the same New Mexico pepper, many people love the taste of New Mexico red ripen pepper but cannot tolerate the heat. This pepper has solved the problem, the same taste complexity of sweet, tangy, acidic and hot flavor that the other version(Hot) has except this one has way less heat, pearly noticeable. The low heat levels allowed other flavor to raise more. In specific, this milder version seems to be more acidic and sweet. When you try this one, you cannot get enough no matter how much you add to your meal, the clean pleasing taste can be addictive. 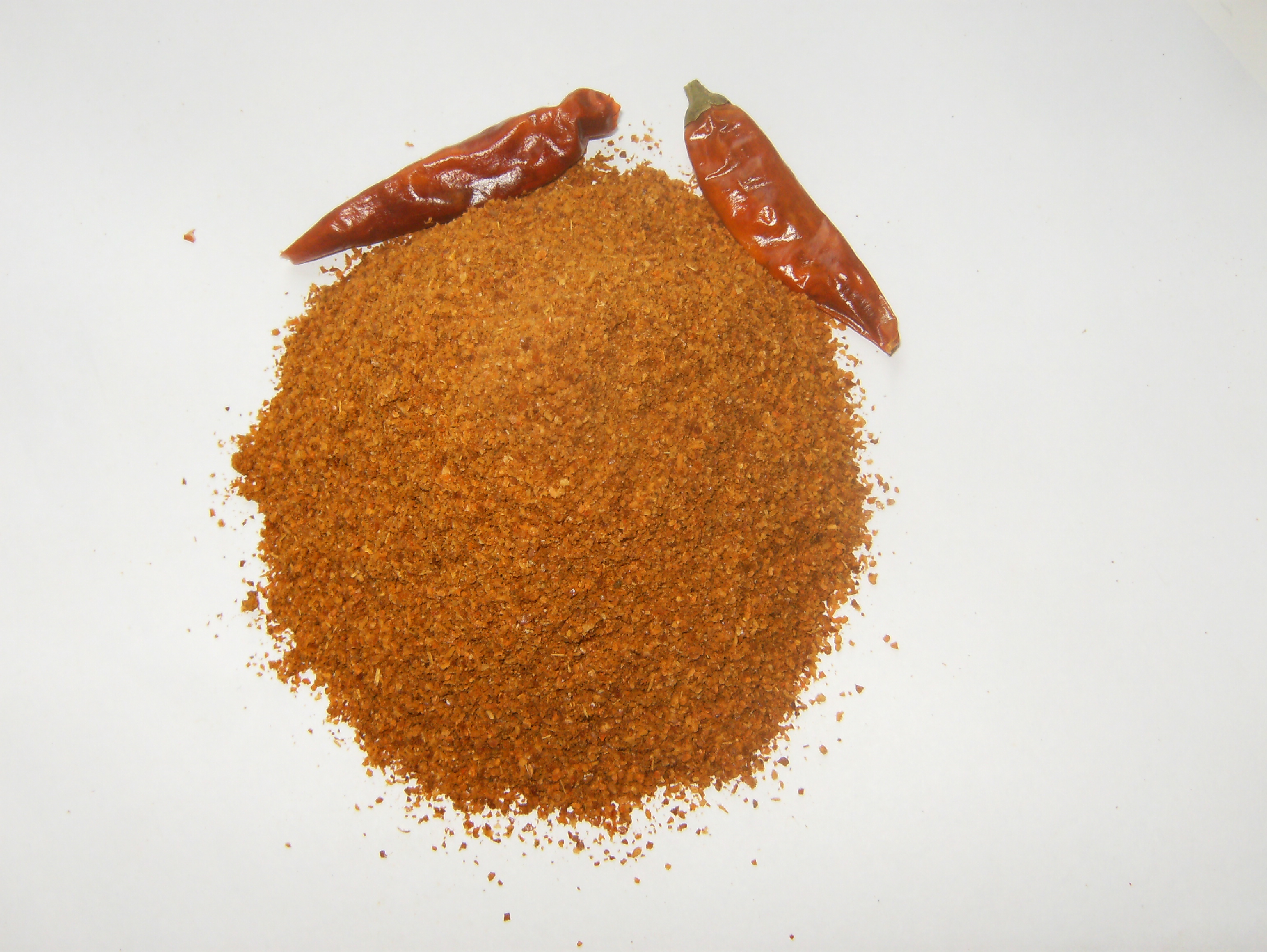 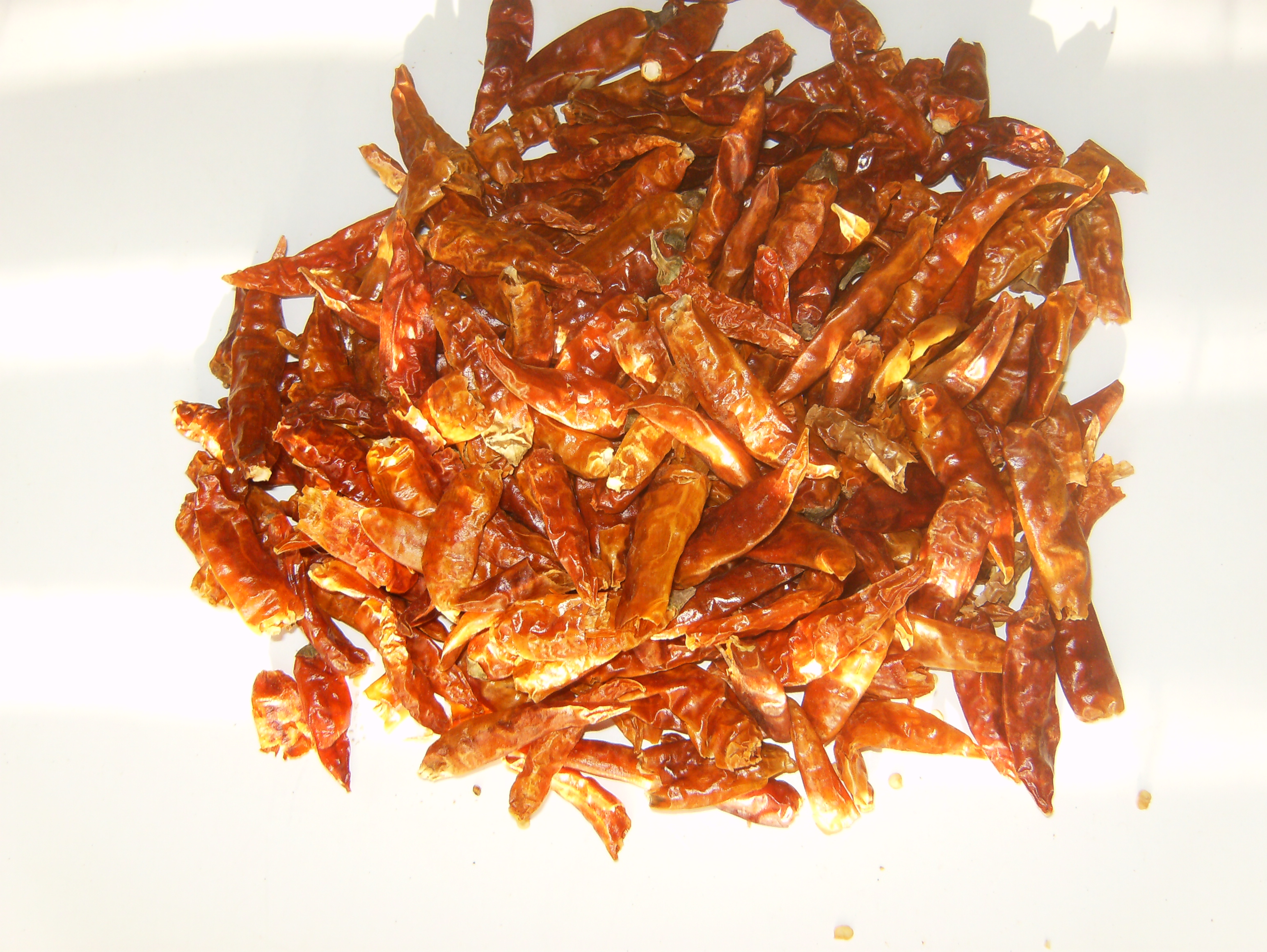 Another native Mexican chili that is widely used and liked, the name means from the mountains in description of where they originated (the state of Hidalgo in Mexico).  While this pepper is very famous and widely used, it is hardly seen red, most people use them green in salsa since they can be much hotter than jalapeno. This red dry Serrano is sometimes also called "balin, chico, tipico and largo” while it is considered medium hot, some actually find it to be too hot, either way, the sharp stinging bite lingers for a while so add just the right amount to your meal. 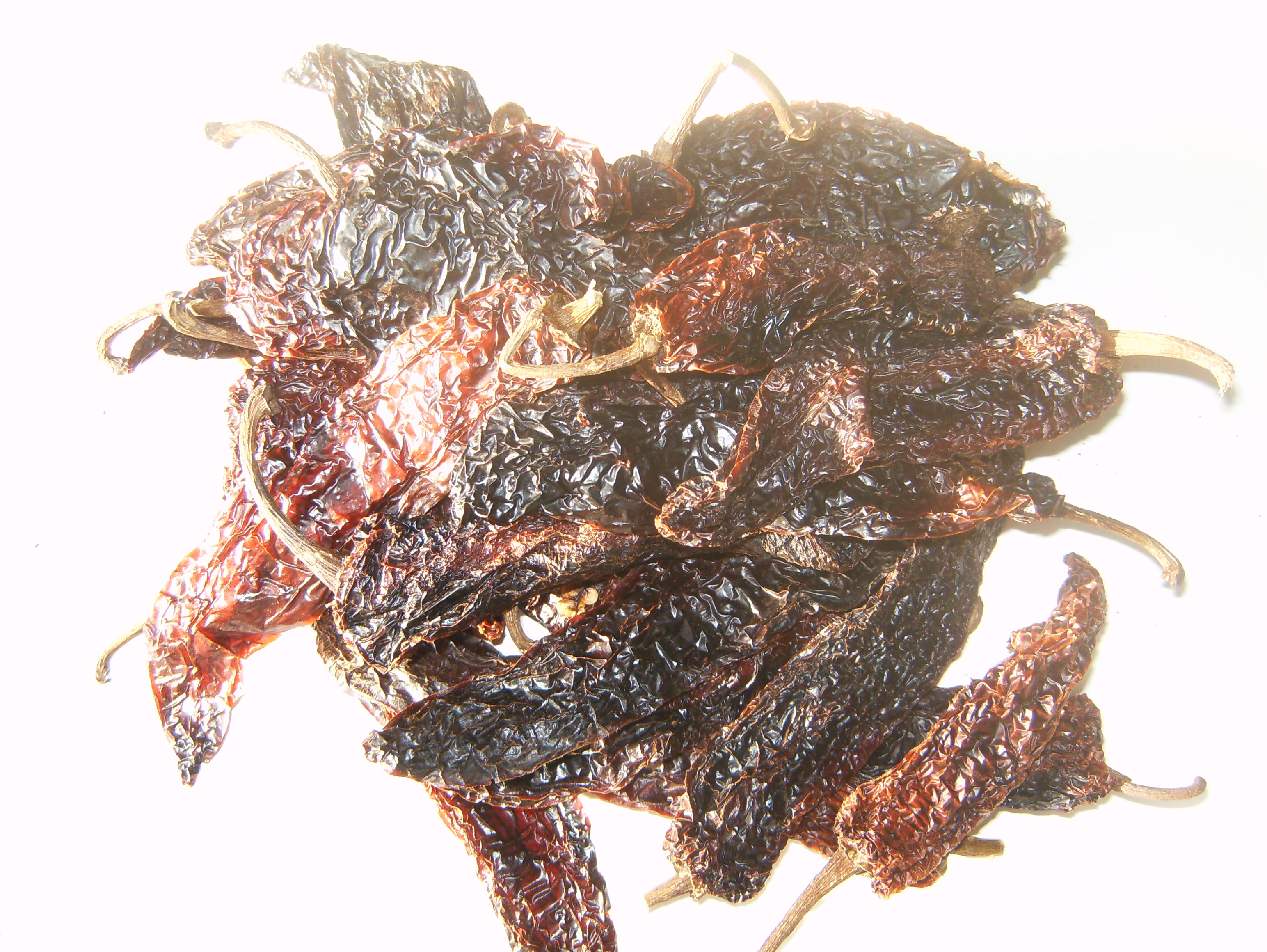 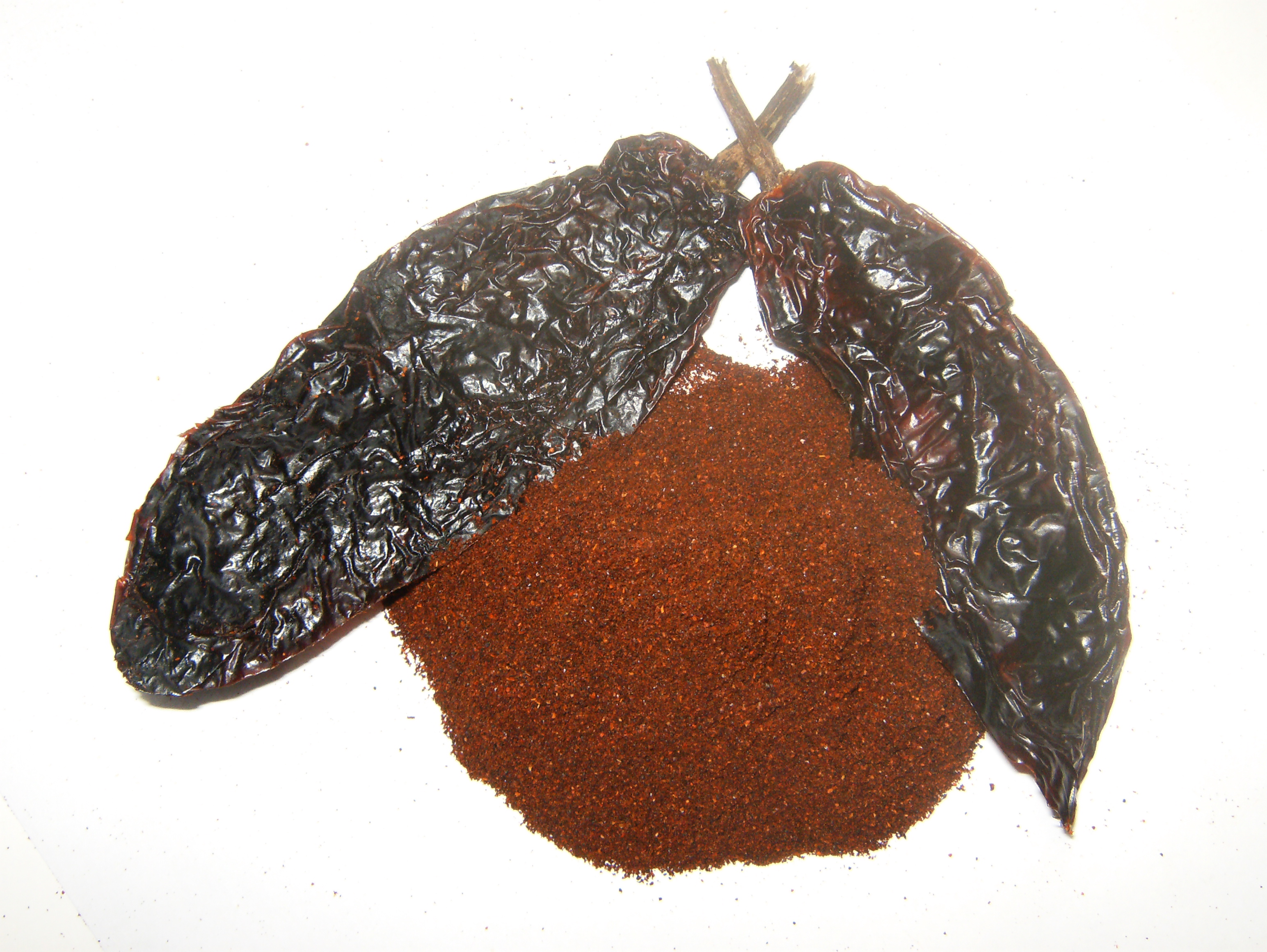 Originated from the region of Oaxaca in southern Mexico, the chili has sharp, deep, rich smokey flavor like roasted coffee. This low heat pepper is used in many sauces and chili paste dishes due to its natural distinctive smell and sweet taste. One of the favorite Mexican varieties for making reallenos 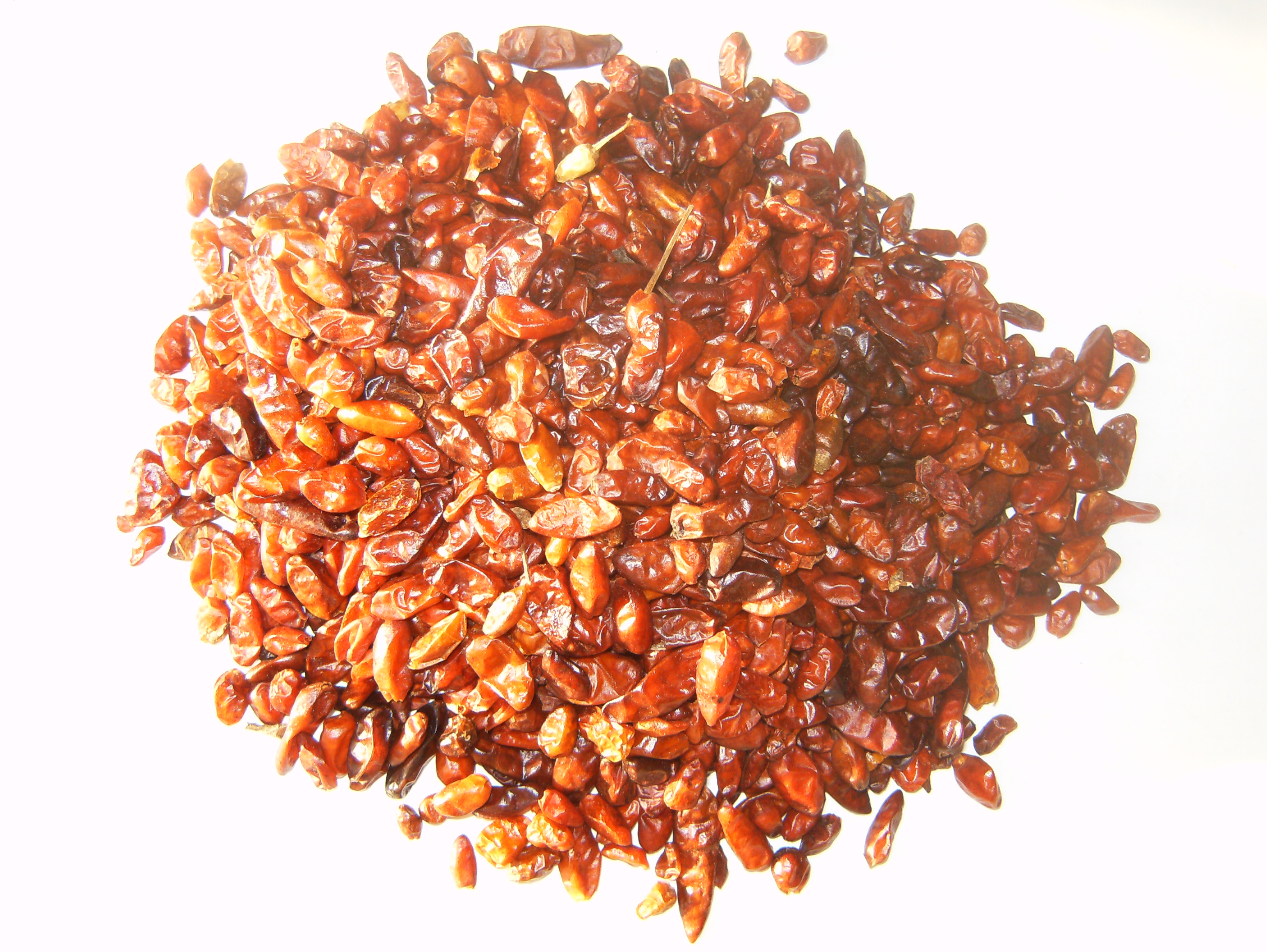